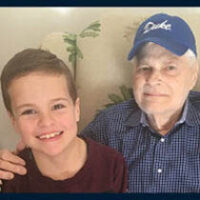 He majored in music at Duke University and graduated in 1962. Lynn served in the Army Reserves. He became a “music man” the next year, teaching band in Henrico County, Va. The shift to social work began the following year when he was employed as a probation officer at the Henrico County Juvenile Court. That led him to earn a master’s degree in social work at University of Louisville.

His career was mostly in community behavioral health, the last 34 years of it as CEO of area community mental health operations in southern Michigan, northern Ohio, and Virginia, respectively. He retired from New River Valley Community Services in Blacksburg, Va. in 2006, after 24 years as executive director.

During retirement, Lynn worked very part-time as an accreditation surveyor of similar organizations in the U.S. and Canada. He taught English as a second language for the local community college and also taught GED classes.

Lynn loved his family, his work, his music, and his travel adventures. He was a leader in life, both personally and professionally, leading with humility and a kind and gentle nature.

A memorial service is being held 11 a.m. Saturday, Sept. 28, at John M. Oakey & Son Funeral Home, 305 Roanoke Blvd., Salem, VA 24153. In honor of Lynn’s wishes, a receiving of friends and a celebratory reception are being held immediately following the service at the funeral home.

In lieu of flowers, donations may be made to New River Valley Community Services, 700 University City Blvd., Blacksburg, VA 24060.

Online condolences may be made by visiting www.johnmoakey.com.