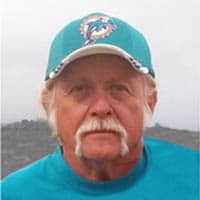 Rickie worked for many years as a welder and in maintenance for the Appalachian Power Company. He was an original member of the Lindside Volunteer Fire Department. He was a former Peewee and Midget Football Coach and ran the chains for local high school football games for years. Anyone who knew Rickie knows his love for old cars and his family. He was a beloved husband, father, grandfather, brother, and friend who will be missed dearly by all those who knew him.

Funeral services will be held at 2:00PM on Tuesday, January 3, 2023, at the Broyles-Shrewsbury Funeral Home in Peterstown, WV, with Minister Randy Penwell and Barry Harper officiating. Burial will follow at Pine Grove Memorial Gardens in Lindside, WV. Visitation will be held from 6:00PM until 8:00PM on Monday, January 2, 2023, at the funeral home.