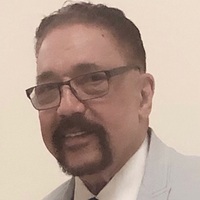 Byron entered into matrimony with the love of his life Carolyn Harvey Charlton on May 12, 1984. He grew up in Radford with a large and tightly knit family, and he loved to tell stories of the athletes, union organizers, moonshiners and other characters he knew from the Jim Crow era to the present. In that stronghold of racism, he grew into a man who truly, deeply and, yes, militantly, believed in equality, fairness and solidarity. When his own father died, a friend attempted to console him by saying his father had lived a good and long life, which he had. Byron responded by saying, yes, that was true, but he wanted him longer. Byron’s wonderful wife, Carolyn, and his daughter and grandson and so many family members and close friends feel the same about him.

Byron never met a stranger, and which was a phrase conferring high praise whenever he offered it to someone else. His smile could be charming, and mischievous. He enjoyed his work so much that he worked full-time up until his untimely death.

In his youth, he attended Christiansburg Institute in Christiansburg, VA and then joined the U.S. Air Force, serving as a Security Policeman. Later, he worked at a steel mill owned by Lynchburg Foundries, where he was a member of the United Steelworkers of America Local Union 2969. He became an elected union leader, in 1970, and held office representing his fellow workers almost continuously until his death, mostly as a volunteer and always with a terrific work-ethic, discipline and generous knowledge.

Byron was a Southern organizer, which took courage and sheer guts. He helped lead the Newport News Shipyard organizing drive for the United Steelworkers, which has been called one of the great transformative organizing drives of the post-Civil Rights era South. The drive centered on more than 10,000 shipbuilders in Tidewater Virginia– the women and men who make and repair the Navy’s aircraft carriers. The company fought the drive with vicious racism and violence, yet with Byron’s help the workers won, and then he was elected to serve as the union representative for USW Local 8888.

Byron was an international affairs operative for the AFL-CIO at the height of the neo Cold War in the late ’70s and early ’80’s. He worked in Africa, the Middle East, Europe and the Americas. His stories from those times would chill your blood, and then leave you laughing. Byron also worked as the assistant to the executive director of the African American Labor Center at the AFL-CIO from 1984-1990. More than 30 years ago, Byron joined the staff of the AFL-CIO as a legislative representative. He worked on federal and postal worker legislation, and served as the chairman of the United Department of Defense Workers Coalition for the past 20 years. Byron loved his career so much when asked if he was going to retire he would respond by saying he intended to die at his desk.

Byron loved helping people. He resented discrimination of every kind, and relished the fight for equality for all, discussing current events and telling and listening to stories. He enjoyed having a “cocktail” and would offer you one in a heartbeat. He always loved exercise, and took to his physical therapy regimen with relish. He will be missed sorely by all who loved him.

Byron loved his beautiful wife, his accomplished daughter and his talented and charming grandson. Byron was preceded in death by his parents, his twin brother Tyrone M. Charlton and his younger brother, Dr. Charles H. Charlton. Byron was the third of four children.

Those left to mourn are his adoring wife of 36 years, Carolyn Charlton; his only daughter, Dr. Angela Charlton, of Ashburn, VA., his only Grandson, Khiorie Stewart, of Fredericksburg, VA., brother, Lawrence Charlton, of Palm Bay, FL., sister-in-law, Margie (Tyrone) Charlton, of Roanoke, VA., sister-in-law Janet (Charles) Charlton of Johnson City, TN and a host of nieces, nephews, relatives and friends across the United States and around the world.

The family will receive friends from 1:00 p.m. on Saturday, January 9, 2021, until service time. The funeral service will be conducted at 1:30 p.m. at Serenity Funeral Home, Roanoke, VA 24016. Interment will be at Brooklyn Cemetery, Fairlawn, VA.

To view a live stream of the service, click here.