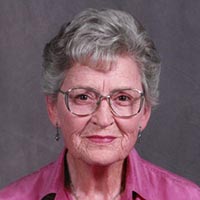 Estelle B. Chandler, age 100, beloved wife, mother, grandmother and great grandmother, of Rustburg, passed away on Tuesday, October 20, 2020. Born in Christiansburg on December 14, 1919, she was the daughter of Victor Vinton and Kittie Richardson Lester. Estelle was preceded in death by her husband of 29 years, Ivan Chandler (and James Compton Butner); her four brothers, Stanley, Rodney, Ralph and William Lester; and her cherished son, Jared Kevin Butner.

Estelle graduated from Christiansburg High School in the 1930’s, married after WWII, reared two children in the 40’s, 50’s, and 60’s; worked as a Secretary (Sealy Mattress Co., Sam Nixon Insurance Agency) until early retirement when she married Ivan Chandler. She was a master seamstress, designed her own crochet patterns, spent years making craft projects and Christmas decorations with cousin Anita. She loved word search and jumble puzzles, jigsaw puzzles and, in her last years, became a voracious reader. Estelle was a life-long member of the Christiansburg Presbyterian Church. She will be sorely missed by close friend Judee Thomas of Mountain City, TN and step-niece Becky Ponton of San Antonio, TX. Estelle loved her family and was cherished and loved by them in return.

A graveside service will be held in late spring or early summer of 2021 at Sunset Cemetery in Christiansburg. Memorial donations may be made to Christiansburg Presbyterian Church or the Children’s Home in Wytheville, VA. Tharp Funeral Home & Crematory, Lynchburg, is assisting the family.

It was Estelle’s wish that the following lyrics to “Goin’ Home” be printed with her obituary.