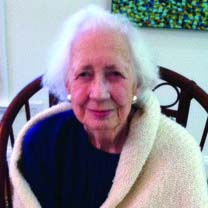 She had a proud heritage of anything Irish — any mention caught her attention. Her parents each came from families of twelve children. She had twenty-four aunts and uncles, and after marriages ended up with forty-seven!

She was preceded in death by her husband, Jason David “JD” Cecil, and by her children, Michael David Cecil, and Linda C. Ward (John). She was also predeceased by her brother, Walter Dunagan (Helen), and sisters-in-law, Anna C. Justice (Rush), Betty C. Blankenship, Brenda C. Edmonds (Roy), and Monroe Blankenship.

She is survived by her daughter Debra Cecil Cobb (W. Allen Cobb Jr.) of Wilmington, N.C., and W. Allen Cobb, III (Emily), and daughters Jane and Louise, of Raleigh, N.C. Her brother-in-law, Robert Cecil (Arlene) of Christiansburg, Va, survives, as well as many nieces and nephews.

Louise was born during the Great Depression when times were hard. During World War II, her father served in the Navy, in the Philippines. She almost didn’t finish high school because she had to work part time after school to make ends meet.

She and JD were married in 1950. He was stationed in San Antonio, Texas, while serving in the military. They had all three children during that time. In 1958, they moved to Salem, Va., where the children first started school. She worked various jobs and went to cosmetology school. In 1974, after all the children completed high school, they moved to their farm in Snowville, Va., where Louise ran a country store for many years. After JD (2000) and Linda (2001) died, she moved to Wilmington, N.C., to be near her daughter, Debra. She referred to Wilmington as having her “second childhood,” with less cooking and responsibilities. Her last two years were spent at Trinity Grove senior living center, where she shared her love of Billy Walker music with the dedicated staff, while reminiscing of her happier, younger times.

Louise loved her family, the Southwestern Virginia mountains, flower gardening, and Irish everything.

Louise’s family is deeply grateful for the committed care provided by the Trinity Grove family, especially during the ongoing pandemic. In lieu of flowers, memorials may be made to Trinity Grove, 631 Junction Creek Drive, Wilmington, NC 28412.

Louise had a special place in her heart for her Wilmington neighbors, the Odoms, and her friend and caregiver, Bettielou Weddle.

Please savor each hug of a loved one – it may be your last.