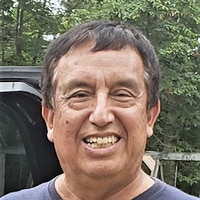 Humberto Castillo, 72, of Peterstown, WV, departed this world to join the Lord on January 13, 2022. Humberto was born on March 13, 1950, in Monterrey, Nuevo Leon, Mexico, to Perfecto Castillo Almanza and Rosa Castillo Barajas (Sifuentes).

On October 5, 1974, he married the love of his life, Virginia Faye Hale and had four children. On May 15, 1980, Humberto became a proud United States citizen. He worked most of his career at Celanese, where he developed several lifelong close friendships and retired after 35 years of service. He was known by several names by family and friends alike (Becco, Berto, Julio and Chico to name a few). Also, Humberto attended Lindside Christian Church.

Anyone who knew Humberto was aware of his enthusiastic interest in cars and working on them with family and friends. He had a unique knowledge and ability to fix almost anything. He thoroughly enjoyed the western genre of films and shows and there was always a good chance he was watching one of them in his spare time. Humberto enjoyed traveling, especially to Mexico, and never missed an opportunity to go somewhere new or familiar. In addition, his athletic passion resided with soccer and was an avid follower of international leagues and competitions. Also, he enjoyed watching WVU football.

His interests listed above were easily shadowed by his love of his family, and always put them first. He loved his wife and children, as any good family man would, but he had a special fondness for his grandchildren. He was caring and giving not only to his immediate family but to many in his extended family and friends. Humberto will be greatly missed by those whose lives were touched by his presence throughout the years.

He was preceded in death by his parents; one daughter Ashley Nicole Castillo; two brothers Bernardo Luis and Sergio Daniel.

Joint funeral services with his daughter, Ashley, will be held at 11:00AM on Friday, January 28, 2022, at the Broyles-Shrewsbury Funeral Home with Minister Randy Penwell officiating. Burial will follow at the Peterstown Cemetery in Rich Creek, VA.

Visitation will be held from 6:00PM until 8:00PM on Thursday, January 27, 2022, at the funeral home. Online guestbook can be signed or condolences may be sent to the family at www.broyles-shrewsbury.com. Arrangements by Broyles-Shrewsbury Funeral Home, Peterstown, WV.