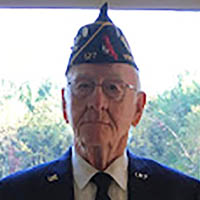 Jim had a great many loves in his life, first and foremost his wife of 63 years, Carrie. But he also loved his many friends from his high school buddies who remained friends for life, to his former co-workers at the Post Office and at Bob’s Radio and TV, to his regular golf and card buddies. He loved his country serving in the United States Navy as a radio operator in the VP-56 Squadron and providing funeral honors for years as part of the American Legion. He loved Great Oaks Country Club in Floyd, where he was a founding member, spending countless hours at Great Oaks. Even as he was losing names and faces because of dementia, he could recite the par for each hole.

Whether from the big smile he often wore or a funny story or joke, he loved to make people smile. Sometimes the jokes weren’t great, but when he and Carrie started laughing it was contagious to everyone else in the room. To those who knew him, it’s redundant to say that Jim was an active member of the Floyd United Methodist Church and many other groups in Floyd County. If he was involved, he was going to be an active member and for much of his life moved from one thing to the next, with a passion for everything he did. He was an amateur woodworker and would often sign the pieces when he gave them to the kids, one often used signature read, ‘made with little skill, but lots of love,’ which was true for almost everything he did.

A private graveside service will be held in the Jacksonville Cemetery with Military Rites by Faith Fellowship.

In lieu of flowers, Jim would really like it if you called an old friend and told them a funny story, played a round of golf, or volunteered in your community.