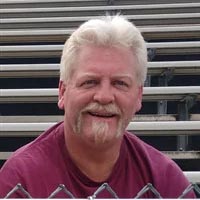 Jeffrey N. Carter, of Christiansburg, VA, passed away on Friday, October 4, 2019. He was born in Baltimore, MD on October 28, 1962. He was preceded in death by his father, James Carter; and his mother, Joan Hanton Carter.

Jeff touched the lives of many families as a coach in many sports, especially wrestling. He had a selfless nature and enjoyed watching kids grow as athletes and individuals. His coaching followed him from New Jersey to Virginia as he taught kids of all ages.

He enjoyed spending time with friends and family. He was very active and involved in his grandchildren’s lives. Jeff took pride in a clean house and a fresh-mowed yard. At gatherings, he would have an entire room laughing with his stories and memories. He had an abundance of knowledge that he enjoyed passing on. His wisdom, stories, and memories will live on through his friends and family.

Visitation will be held on Wednesday, October 9, 2019, from 1-3 p.m. at Horne Funeral Home. Funeral Services will follow at 3 p.m. in the Chapel.