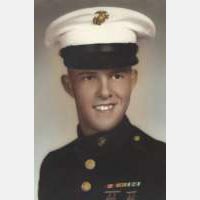 Coy Glenn Carter, 66, of Olean Road, Ripplemead, departed this life Saturday morning, June 27, 2015 at his home. He was born in Pearisburg on February 28, 1949, a son of the late Brown and Lucille Stevers Carter.

Coy was a decorated Marine Corps Veteran of the Viet Nam Era, being awarded two purple hearts, a gold star, four bronze stars, and several Viet Nam Citations, and was a member of DAV. He had been employed as a heavy equipment operator. He was preceded in death by his parents and sisters Judy Sage and Mamie Meadows.

He leaves to cherish his memory his devoted wife of 39 years, Wanda Bailey Carter; his sons and daughters-in-law Justin and Carrie Carter of Christiansburg, Mason and Tina Dennis of Ripplemead, Terry Carter of Pulaski; his sisters Connie Niece of Ripplemead, Nancy Williams of Pearisburg, and Dolly Martin of Ripplemead; his grandchildren Brandi Dennis and Kenneth Martin; his great-granddaughter Aliyah Dennis.

Funeral services will be conducted Tuesday at 11:00 am in the Kendall Funeral Home, 605 Snidow St., Pembroke with Pastor Merrell Hedrick officiating. Burial will follow in Birchlawn Burial Park in Pearisburg with military honors by the U S Marine Corps, and local VFW and American Legion Posts. The family will receive friends at the funeral home Monday evening from 6 until 8 pm.