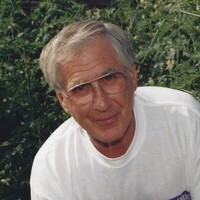 In the 1960s, the couple moved to Claytor Lake, VA from West Virginia, where they spent the majority of their shared years. Pete was General Manager and a partner at Bailey Lumber Company in Pearisburg, VA, where he commuted every day for over three decades. An avid handyman and builder, Pete showed his commitment and devotion to family and community by serving as the go-to person for taking care of almost any project around the lake. Once “retired” from Bailey Lumber, Pete stepped into the even more demanding role of full-time contractor. As he worked out of his truck and garage, Pete’s name became synonymous with quality work throughout Southwest Virginia.

While a hard worker through-and-through, Pete valued family and community above all and always found time to experience the beauty of Claytor Lake and spend time with those he loved. Ever the gracious hosts, Pete and Betty, lovingly known as Papa and Nanny, were ready to open their home for celebrations. Of particular note were their 50th wedding celebration in 2004; the wedding of Nicole, their granddaughter in 2008; and feeding the entire Richmond Spiders Men’s soccer team following their match with Virginia Tech in 2012. We rejoice that they are together again in eternal splendor, planning the greatest family get-together that can ever be imagined.

Pete was born on June 27th, 1928, joined the U.S. Army and served his country with honor at the end of World War II. He was a life-long member of the Lions Club, a member of St. Edwards Catholic Church, and the noted inventor of Shovel Dogs.

Pete and his family are grateful for the compassionate care he received from the teams at Heartland Hospice and Our Lady of the Valley throughout his final days.

A service will be held in the summer of 2021, where both Betty and Pete will be interred with their son Phillip in Bluewell, West Virginia.

In lieu of flowers, memorial contributions may be made to the Dublin Lions Club, Feeding Southwest Virginia, or the Michael J. Fox Foundation for Parkinson’s Research.

The Capaldini family is in the care of Mullins Funeral Home & Crematory in Radford, Virginia. www.mullinsfuneralhome.com