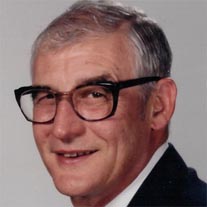 Roland Hailey Canada, 80, of Blacksburg, passed away on August 20, 2015. Roland, son of Ellwood Bass Canada and Elsie Hailey Canada, was born in Charlotte County, Virginia, served in the United States Army and graduated from Virginia Tech in metallurgical engineering, ‘59.

He worked for Hercules Incorporated at RAAP for many years. He was a teacher and principal in Charlotte, Appomattox and Warren counties and Radford City promoting integration in public schools and supporting children of poverty and people in need.

A devoted husband and fabulous father and grandfather, Roland had a great sense of humor and was an avid fan of all Virginia Tech sports. He was preceded in death by his parents, his brother, Ellwood Canada and sister-in-law, Mary Frances Canada.

He is survived by his wife of 54 years, Carolyn Odom Canada, children, Paul Canada and Anne Canada and grandchildren, Winston and Carolyn Hailey Phelps.

The family would like to thank the marvelous staff of NRV Good Samaritan Hospice. In lieu of flowers, contributions may be made to the Salvation Army.

A memorial service will be held on Sunday, September 20,2015 at 10:00 a.m. in the Skelton Conference Center at Virginia Tech, Blacksburg.