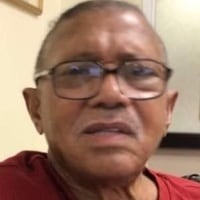 Edward Lorenzo Callahan, 81. A United States Army veteran, died on Sunday, June 9, 2019 at the Suburban Hospital in Bethesda, Maryland. He was kindhearted, with a deep laugh, and his stories would fill up the history books. He wore his hair parted, slacks creased, and had the right joke for every occasion.

At the age of 18 he went into the United States Army where he was later given an Award for Good Conduct as a Private First Class.

Edward enjoyed animals he worked at Animal hospitals until he retirement. He loved long morning strolls, porch swings, hanging out at Whole Foods Market, watching Jimmy Swagger on TV, and making friends with the whole neighborhood. In his later years, at the Bethesda Rehabilitation Center, he fell in love with acrylic painting and spent hours creating masterpieces to hang on the wall.

He affectionately called the ones he loved “buddies”. If you were a “buddy” you were tucked and cherished in his heart.

Funeral services will be held 1:00 p.m., Friday June 21, 2019 at the First Baptist Church, Magazine St. The family will receive friends one hour before service time at the church.

To sign the online guestbook, visit www.bowerfuneralhome.com. Bower Funeral Home, Pulaski is handling the arrangements for the family.