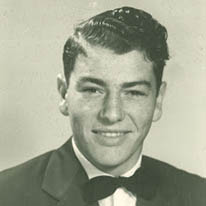 Joseph Harmon Caldwell passed away on June 26, 2022 at Carilion Hospital of NRV in Radford. Joe was born during a terrific snowstorm in Floyd VA on March 4, 1942 to Thornton William and Senora Harmon Caldwell. With the exception of time spent in the military, Joe lived on his farm in Indian Valley, VA.

Joining the Army at age 18, Joe served in the 101st Airborne Division as a proud “Screaming Eagle” until he was transferred to Korea, where he served over two years. After military service, Joe was a long -distance truck driver and enjoyed driving all over the United States until he retired to care for his wife, who had M.S.

In addition to taking care of his farm, Joe was an admired trainer of foxhunting dogs and was a respected breeder of foxhounds on the East Coast. One of his greatest pleasures was running the hounds with his foxhunting buddies.

He was a great storyteller and possessed a sense of humor that his friends and family enjoyed. He had a natural talent for training horses.

Joe was a man of strong faith, who loved his family and delighted in his children and grandchildren, and loved his country.

He was an outdoors person who enjoyed fishing, the mountains, bluegrass music, and God’s creations.

Joe was preceded in death by his parents Thornton and Senora Caldwell, and his loving wife of forty-four years, Alice Shelor Caldwell.

The family wishes to offer special appreciation to Joe’s wonderful caregivers, Teresa Moses and Harmony Pratt, who enabled to Joe to be in the comfort of his home during his extended illness.

And, special acknowledgment to Joe’s daughter, Senora, whose outstanding nursing care and love and support gave strength to her Dad.

The family is also grateful to the compassionate staff at Carilion NRV/Radford, who treated Joe with respect, empathy and excellent care during his last day on earth.

Visitation for Mr. Caldwell will be held at Meadows Baptist Church in Meadows of Dan on Friday, July 1st, 2022 from 11am to 12:30 pm, followed by the funeral service at 12:30pm. Military rites will be held at the graveside at the church.