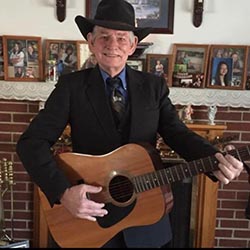 Ronald Wade Byrd, 73 of Galax, VA died Sunday, September 30, 2018 at his home. He was born in Pulaski, VA on March 22, 1945 and was the son of the late Amos Franklin Byrd and Flora Alice Manuel Byrd. He was also preceded in death by his first wife, Sheila Byrd and by five brothers. He was a retired truck drive for a local oil company and a member of the Pulaski American Legion Post #7.

Ronald, known to most as “Ronnie”, was a man of God who loved his family, his church, and especially his music. In his early days he performed in various country music shows but gave those up to become a minister in the Church of God of Prophecy and gospel singer. Ronald was blessed with the gift of writing songs which he used to witness to countless souls, leading them to Jesus. In his later days, Ronald enjoyed spending time with his wife, children, grand-children, and great-grandchildren, singing to them, telling jokes and stories about his life. His main focus though was to win as many people to Jesus as possible. His last bit of advice on this earth was to “make it, make it, make it”. Ronald was loved by all and will be greatly missed.

Funeral services will be held Wednesday, October 3, 2018, at 2:00 PM from the Stevens Funeral Home Chapel with Pastors Titus Anderson and Garnett Byrd officiating. Burial will follow in the Oakwood Cemetery, Pulaski with Pulaski VFW Post #1184 conducting the military graveside rites. Visiting will be Tuesday evening at the funeral home where the family will receive friends from 6:00 – 8:00 PM.