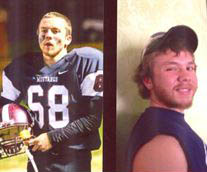 Deven Rudge Butterworth, 18 of Elliston passed away on Tuesday, June 23, 2015 as he lived, always helping others. Deven had a smile that could light up the darkest days and never met a stranger. He enjoyed fishing, hunting, kayaking and being with his friends. He left a lasting impression on everyone he met and will be missed by so many.

The family will receive friends at the Horne Funeral Home from 5-8 p.m. Friday, June 26, 2015. The funeral service will be held at 1 p.m. at the Eastern Montgomery High School Auditorium with Pastor John Collins officiating. Interment will follow in Halls Church Cemetery.