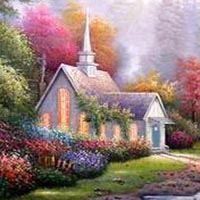 Joining her on Sugar Run in 1945 was her beloved husband, Bane Burton, of Bland County. Bane preceded her in death two years ago. Georgie was a member of Thessalia United Methodist Church for 80 years. She taught Sunday School and was Sunday School Superintendent for 20 years. She was a past member of the Homemakers Club and helped organize the Thessalia 4-H Club.

Besides her grandparents, parents, and Bane, she was preceded in death by her son, Ernie Burton; a daughter-in-law, Elfriede Burton; a son-in-law, Don Robinson; and seven sisters, (Edna, Mamie, Helen, Ruth, Rubye, Laura Alice, and Louise).

Visitation will be Wednesday, August 5, 2009, from 4 to 7 p.m. at Thessalia United Methodist Church on Sugar Run Road. Funeral services will follow at 7 p.m. with the Rev. Jack Jenkins, the Rev. Paula Campbell and Charles Henderson officiating. Entombment service will be held at Birchlawn Abby, Pearisburg on Thursday at 11 a.m.

Those wishing to make memorials may consider the Giles County Bible Bus Program, PO Box 538, Pembroke, Va., 24136. The family is being served by A. Vest and Son Funeral Home, White Gate, Va.