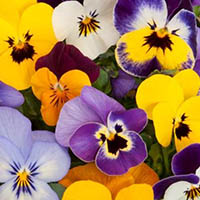 Born in Bluefield, W.Va. on October 29, 1920, she was a daughter of the late Everette Ransom Alvis and Eulalia Powell Alvis of Narrows. She was a faithful member of Memorial Avenue Seventh Day Adventist Church in Roanoke, was a graduate of Narrows High School and worked for many years as a Social Services Secretary for the City of Roanoke.

She was preceded in death by a sister, Dorothy A. Smith; and two brothers, James D. Alvis and Everette “Buddy” Alvis. She leaves to cherish her memory two sons, Gabriel A. Burton of Cape Canaveral, Fla. and Gary Zane Burton and his wife Emily of Huntingtown, Md.; three sisters, Helen Johnson and Madeline Moles of Ripplemead and Delores Smith of Adelphi, Md.

Funeral services will be conducted Wednesday at 11 a.m. in the chapel of Birchlawn Abbey in Pearisburg. The family will receive friends at the Kendall Funeral Home at 605 Snidow St. in Pembroke Tuesday evening from 6 to 8 p.m. Online condolences may be sent by visiting www.kendallfuneralhome.com.