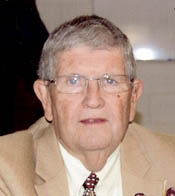 Reverend Newton Joseph Burnside, Jr., of Copper Hill, slipped away to heaven on March 19, 2014 at the age of 76. He was employed by Appalachian Power Company for 37 years as Operations Coordinator. He retired early to enter the ministry. A graduate of Berean Bible College in December 1994. He has served as pastor in Roanoke and Salem and presently at Blue Ridge Chapel Assemblies of God in Floyd, Va. Served as Honor Bound Director for 13 years in the Appalachian District, traveled to Africa and India spreading the gospel. He was a man with a humble spirit who had love for his fellow man.

Joe was preceded in death by his first wife and mother of his children, Brenda; his parents, Newton and Alma Burnside.

Leaving behind to cherish his memory are his wife of 36 years, Jeannette Wimmer Burnside; his daughter, JoAnn Burnside of Nashville, Tn.; son, Jerry Burnside of Roanoke, Va.; Sister and brother-in-law, Sylvia and Jim Hardwick of Abingdon, Va.; Brothers and Sisters-in-law, John and Nancy Burnside of Radford, Va. , Richard and Andrea Burnside of Florida; His mother-in-law, Mrs. L Z Wimmer; as well as many nieces, nephews and a host of friends near and far.

The family will receive family and friends at Gardner Funeral Home, Floyd, Va. on Saturday, March 22, 2014 with visitation from 4 to 7 p.m. A Celebration of his home going will be held on Sunday, March 23, 2014 at 2 p.m. at Gardner’s Chapel with Reverend Irvin Steidings , Reverend David Dillon and Reverend Calvin Hickson officiating.Interment will follow in Huffville Cemetery.