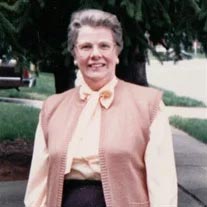 Margaret Louise Carico Burner, age 92, passed away peacefully on 19 January 2020. Margaret was born on February 21, 1927 in Huntington, West Virginia to parents George Wetzel Carico and Carilda Jane Withrow. She was the youngest of eight children.

She was preceded in death by her husband John; her son Andrew; her grandson, John Franklin Burner III (“Johnny”); her parents; her two sisters, Verna and Elizabeth(“Bett”); and her five brothers, Clifford, Herschel, Willard (“Pete”), Charles (“Chick”) and Cleveland (“Cleve”).

She was a devoted mother, grandmother and great-grandmother. Her family was everything to her. She loved spending time with her family and cooking for them. She loved it when the family would all come home for a visit and they could all gather for a meal.

Margaret was a lifelong member of the Church of Jesus Christ of Latter-Day Saints, where she served faithfully in many ward and stake callings. She served as a Relief Society President for many years. She served in many other callings in the church as well, including the Primary, Young Men-Young Women’s organization, Sunday School, single adult’s organization, seminary teacher, Family History teacher, ward newsletter. Whatever calling she served in, she gave it her all. She was always willing to help others by serving them. She was a strong woman of faith and loved the Lord.

Special thanks to the nursing staff at Commonwealth Senior Living, Heritage Hall, and Intrepid Hospice for their compassionate care of Margaret in her final years.

Visitation will be held Saturday, January 25, 2020, from 9:30-10:30 a.m. at Horne Funeral Home, with the funeral service to follow at 11 a.m. in the Chapel. Bishop Jeff Hendricks will officiate the service. Interment will be at Mountain View Cemetery in Vinton, Virginia.