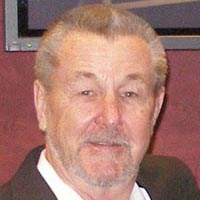 Ralph Curtis Burchett Sr., 76, of Pulaski, passed away Wednesday, August 26, 2015. He was born September 26, 1938. Ralph was a graduate of Pulaski High School where he was a four-sport star: football, basketball, baseball, and track.

Ralph enjoyed outdoor activities such as hunting, fishing, and all sports. He served two terms in the United States Army, after which he returned to Pulaski and married Beulah Cox Burchett until her death in 2001.

Ralph is survived by his three sons and daughters-in-law, Curtis and Laura, Wayne and Susan, and Michael and L.E.; and his eight grandchildren, Tori, Cody, Morgan, Kelsey, Ryan, Logan, Hannah, and Heath. He is also survived by his brother, Ronnie and Barbara; his sister-in-law, Betty; and his half-brother, Junior. The family would also like to thank Ricky Thomas for his loyal friendship. Ralph is preceded in death by his wife Beulah, his parents Malachi and Virginia, and his brother Richard. In lieu of flowers, the family has requested a donation to the American Heart Association in honor of Ralph Burchett.

Visitation will be Sunday 2 to 4 p.m. with the service immediately following at Stevens Funeral Home in Pulaski with the Reverend Jim Linkous officiating. Friends and family may visit at the home of Wayne and Susan Burchett at 3064 Lowmans Ferry Rd. Arrangements by Stevens Funeral Home.