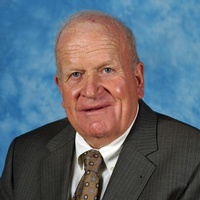 James Benjamin “J.B.” Buckland died Tuesday, June 5, 2018, in Rich Creek, Virginia, from injuries sustained in a farming accident. He was born on August 8, 1945, in Pearisburg, Virginia, to the late Sherman “Pete” Buckland and the late Mary Morrison Buckland.

J.B. was a gentle, kind-hearted, hard-working man who was loved by many. He was a proud graduate of Narrows High School and later attended Virginia Tech. He worked construction as a millwright at Dupont in Martinsville and also at the Radford Arsenal before joining the Virginia Department of Agriculture where he worked for 20 years as a meat inspector. An entrepreneur, for the last thirty years he worked in various businesses in addition to running his own cattle farm on land that belonged to his father’s family on Peters Mountain.

Left to honor his memory are his beloved wife of 53 years, Barbara Jo Caldwell Buckland, daughter Ann Borchelt and husband Bret of Winston-Salem, N.C., and son Jason Buckland and wife Emily of Narrows, brother Sherman “Sonny” Buckland and wife Linda, sister Scarlet Ratcliﬀe, all of Rich Creek, mother-in-law Margaret “Peggy” Caldwell of Narrows, and the lights of his life, grandchildren Caroline, Julia and Ben Borchelt of Winston-Salem, and Jack, Wyatt and Maggie Buckland of Narrows, several nieces and nephews, cousins and countless friends.

Funeral services will 2:00 PM on Sunday, June 10, 2018, at the First Baptist Church in Rich Creek, VA. A visitation will be held from 6:00 PM until 9:00 PM on Saturday, June 9, 2018, at the Narrows High School auditorium. In lieu of flowers, the family requests that donations be made to Giles Technology Center Land Laboratory. Online guestbook can be signed or condolences may be sent to the family at www.broyles-shrewsbury.com. Arrangements by Broyles-Shrewsbury Funeral Home, Peterstown, WV.