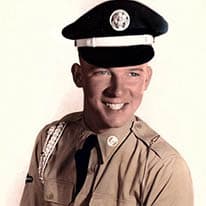 Buck was the eldest of 4 children and grew up on his parents” farm in Giles County, VA, during the Great Depression. He graduated from Eggleston High School and thereafter saw much of the world, primarily while serving his country in the USAF air police (and as an honor guard escorting diplomats) – first at Egland AFB, Florida and several years at Itazuke AFB near Fukuoka, Japan during the Korean War. He would sometimes hop on bomber flights over Korea, courtesy of his pilot friends (“exciting” but not the smartest thing I ever did”). Buck always showed kindness to the native Japanese workers who assisted the US military, often sharing his rations (“because it was the right thing to do”) and then facing frequent KP duty.

Unbeknownst to his siblings, Buck sent his entire paycheck home to support his parents and siblings. For pocket money and to buy gifts to send home, he did laundry and shined shoes for other members of his squadron. This information was revealed to his daughter many decades later at a reunion of the 6160th Air Police Squadron by one of his squad mates.

Family always came first to Buck. After military service, Buck attended Bluefield College but dropped out to work after his father became ill. He later earned certificates from Southwest Virginia Technical (Community) College. After working for Timberlake Hardware Company and the Norfolk & Western Railroad, he worked 35 years for Appalachian Power Company (and farmed another 6-8 hours a day, 7 days a week).

Buck married the love of his life, Mary Ella Hedrick Buchanan, in 1958. Together, they raised 5 children and got all of them through college: three sons graduated from Virginia Tech (one added a Washington & Lee Law degree), one daughter from Emory & Henry College, and one daughter from the University of Virginia (two degrees). Buck and Mary also helped raise other children. Buck was the only real father some of them have ever known. He deeply cherished his family (both blood kin, honorary and extended), most especially his grandchildren.

He gave many tractor rides, instruction on riding 4 wheelers, shooting lessons, harvesting hay, cattle and sheep feeding, offered lots of sage advice, and wove tales of yore. Buck said his worst trip was on a 1950s military transport ship from Japan to San Diego “where land was $25/acre” (wish he had farmed there!). “Seasickness nearly killed me but a friend from the officers mess would smuggle out fresh fruit and that’s all I could stomach.” He never wanted to take a sea cruise thereafter.

His young family did enjoy many trips to the Smoky Mountains, Texas, New York / New Jersey, as well as Myrtle Beach, SC and Destin / Ft. Walton Beach, FL” where they caught a lot of blue crabs with chicken necks (saltwater fishing with Zebco rods and reels proved less successful). The Buchanan-Wendell property along the New River at Eggleston, VA also provided many fond memories.

Buck was a quiet and humble man — he once carried an injured APCO coworker a mile through waist high snow drifts, off the top of Bald Knob (top of Salt Pond Mountain at Mountain Lake) during a blizzard; on another occasion he went back into a burning house near Newport, VA to retrieve the elderly owner’s cherished rifle; more than once he took a loaded gun away from an armed man. He never shared any of these stories – we only heard them from a fireman or other person, but never from Buck. That’s just the way he lived his life. Perhaps one of his bravest forays was helping take some of his grandchildren to Disney World during a few sweltering October days in Florida!

He was a member of the Independent Order of Oddfellows Wabash Lodge 189, Past member of the Triangle Ruritan Club, member of VFW Post #6000 and American Legion Post #68 in Narrows.

Buck’s kindness to others was returned to him by many caring members of his community in his later years. He also experienced lively, humorous, conversations and was treated with dignity and respect through the special relationship he had with his caring angel, Angela Shrader, who he considered another daughter. “Your work is finally done Pops, it’s high time to go play, and please give our loved ones lots of hugs until we can do so with you.”

Funeral services will be conducted Sunday, January 23, 2022, at 3:00 pm at the First United Methodist Church in Pearisburg, VA with Charles Henderson officiating. The family will receive friends at the church two hours before the service, from 1:00 ” 3:00 pm.

We will be observing COVID-19 precautions, please wear a mask and practice social distancing.

The Air Force Honor Guard and VFW Post #6000 will be performing the Military Honors at the church.