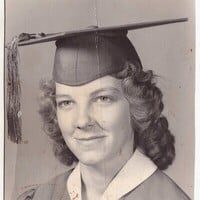 Caroline “Callie” Young Buchanan, 80 of Pearisburg, VA departed this life entering streets of Gold under the care of Carilion Giles Community Hospital and with the love of her family on January 26, 2022. Born December 30, 1941, she was a daughter of Robert Alec and Mary Frances McGuire Young.

Callie will best be remembered as a loving Mom, Grandma, Aunt, Sister, and friend who cared for all, even the stray cats. Callie graduated from Eggleston High School. For more than 30 years she worked in the spinning department at Celanese. As a young lady, Callie was a part of another special group, traveling and playing softball with the Pembroke Rebellettes. She could also be found playing Bingo, doing a puzzle, drinking coffee with a friend, going for a drive counting deer, or cooking for her family who she loved so dearly. Her best days, she would tell you was caring for her family, which included her friends; her kid’s friends (because this is the house, they all wanted to go to); or just someone who needed a bit more tender loving care, whether cooking or reminding them all that she had better not catch them at the river.

There will be a funeral service conducted for Callie on Saturday, January 29, 2022 at 2:00 PM in the Kendall Funeral Home Chapel with Pastors Gary Poff and Eddie Kendall officiating. A committal service will follow in Birchlawn Burial Park-Pearisburg, VA. Family will receive friends Saturday, January 29, 2022 from 12:00 PM until 2:00 PM. The family wishes to remind all to honor Callie by living these angel rules such as she lived; be grateful, help the needy, be kind to others, open your heart wide; give hugs daily, never speak in anger, be humble, and Love one another. A guestbook is available to send a condolence by visiting www.kendallfuneralhome.com. The staff of Kendall Funeral Home are honored to serve the Buchanan Family.