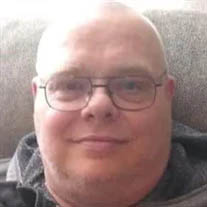 Paul and Kristina moved from Portsmouth to Dublin, Va., in 1993 and to Blacksburg in 1999. Paul worked in the food service industry for over 25 years for establishments such as Pizza Hut, High’s Ice Cream, KFC, Hardee’s, McDonald’s, Wendy’s, Warm Hearth Dining, Virginia Tech Dining Services, Mellow Mushroom, Zaxby’s, Burger King, and Hwy 55. He worked in the lawn service industry in Portsmouth, including as a live-in groundskeeper for Meadow Brooks Memorial Gardens Cemetery; likewise, he performed grounds maintenance for the Blacksburg Parks & Recreation Department. He was a parts driver for Harvey’s Chevrolet and held positions at Pulaski Furnishings, Findley’s, and the Foundry.

Paul loved all things sci-fi, especially Star Trek, Star Wars, and Transformers. He shared his love of Transformers with his grandsons, as he was just a big kid at heart who loved his family well. Some of his favorite sayings were, “Transform and roll out!” and “Beam me up, Scotty!”

Paul grew up in Portsmouth’s Sweethaven Baptist Church and later joined his wife at Western Branch Community Church in nearby Chesapeake. After moving to the New River Valley, the couple eventually joined Dublin Presbyterian Church (presently known as First Dublin Presbyterian Church ECO), where he was a member of the choir and showed that he had the heart of a servant helper.

The family is being cared for by McCoy Funeral Home. There will be a private family viewing and a celebration of life service, to be announced.

In lieu of flowers, please consider a donation to Good Samaritan Hospice or a donation to the family to help cover expenses (contact McCoy Funeral Home, Blacksburg).

A special thanks to Good Samaritan Hospice.

Please think of Paul the next time you enjoy a good sci-fi show.