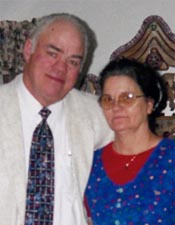 Merle David (Junior) Brumfield, age 75, of Blacksburg died, Friday, February 21, 2014, at his home. He was born in Montgomery County, VA on October 30, 1938 to the late Merle A. and Ruby A. Carter Brumfield. He was preceded in death by his two sons, Timothy Dean Brumfield, and Billy Joe Brumfield, and his two brothers, Billy and Buddy Brumfield. He was co-owner of D & M Parts in Blacksburg. He was a Christian man that loved the Lord, and attended Red Bluff Tabernacle, in Ivanhoe, VA. He loved his family, as well as his hobbies of playing the guitar, and driving his vintage cars and trucks. He will be sadly missed by his loving family, and all that knew him. He is survived by his wife of 56 years, Jenny Ellen Thompson Brumfield, of Blacksburg, who he married February 5, 1958. He is also survived by his Daughter and son-in-law, Dempsie B. and Wayne Ketch, his sons and daughters-in-law, David and Kathy Brumfield, Steven and Kim Brumfield, sister, Patsy Day, eleven grandchildren, and twelve great-grandchildren, all of Blacksburg. Funeral Services will be conducted Sunday, February 23, 2014 at 2:00 pm in the McCoy Funeral Home Chapel with Pastor Virgil Porter officiating. Interment will follow in the North Fork Baptist Church Cemetery. The family will receive friends from 12 to 2:00 pm prior to the service, at McCoy Funeral Home, Blacksburg.