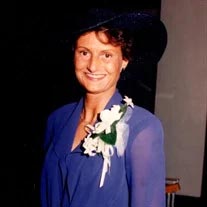 Our beloved mother and grandmother, Linda Rosemarie Bohn Bruck, formerly of Potomac, MD, passed away December 17, 2020. She will be greatly missed.

Linda (Sieglinde) was born on Nov. 17th, 1937 to Joseph and Anna Koch Bohn in Gross Betschkerek in what is now the city of Zrenjanin, Serbia as a member of the German speaking Danube Swabian population. After an idyllic early childhood, her father was imprisoned and shot after the Serbian Partisans took over and she was imprisoned in a work camp with her three siblings, mother, and both grandmothers. They managed to survive and stave off scurvy and famine by eating onions and gleaning in crop fields nearby. They escaped from the camp on one moonless night on foot, leaving one grandmother behind, and trekked over the border into Romania. They then stowed away on a train across Hungary before then crossing into Austria on foot.

There in post-war Vienna, Austria, she became part of a large population of refugees, and they lived for some years in old military barracks before moving into a two bedroom apartment shared by the five of them, and it even had a private indoor toilet and bath. Thanks to the hard work and cleverness of her mother, she was afforded a good education and trade school as well as enjoying the many cultural events and resources of the capital city of Austria.

She met and married Nicholas Bruck, a fellow displaced Danube Swabian, and they moved to New York City in 1961. There she worked as an interpreter at the Austrian Embassy, and embraced her new country and city. In 1967, she and Nicholas had an adventurous year living in Guatemala City and exploring Central America, where he was teaching at the University. In 1968, they moved to the Washington, DC area, where they settled in the Glen Hills suburb in Montgomery County and raised their children.

In the process, she also ran a small horse boarding stable, raised a few head of cattle, kept chickens to sell eggs, participated in the PTA, ran a campaign to keep a nearby quarry from expanding, and went to night school for her real estate license. Her children were all taught proper etiquette to answer business calls and take messages.

She had more time after her children grew up and left, so she enrolled in classes at the local community college, as well as traveled to visit the children and her own family in Austria. At one point she drove through Europe and into Morocco to visit one daughter who was in the Peace Corps there.

Around 2009, after a long illness, she moved to Blacksburg, Virginia, and found a new home here in the mountains of southwest Virginia. She loved nature, to walk the local trails, enjoyed the theater and concerts, and to garden at her daughter’s house.

She was preceded in death by her parents, siblings Helga Geringer and Seppi Bohn of Austria, nephew Christian Geringer, and grandson Peter Modlin.

The family is grateful for her caregivers from Community Care Solutions (Crystal and Alex), from Interim Health, and others thanked privately, for helping make her last years and days, comfortable and as independent as possible.

A private funeral Mass will be held on December 28th, followed by a short graveside service at 12:30 at Memorial Gardens of NRV.

Online condolences may be shared at www.McCoyfuneralHome.com.