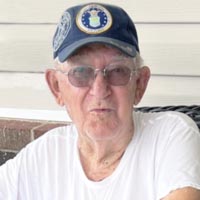 Sonny was a member of the First Baptist Church in Narrows, VA, and attended the Cashmere Baptist Church. He was a proud U.S. Air Force Veteran and remained very patriotic throughout his life. He worked as a self-employed machinist and was well known for building and flying model aircraft, which he developed and patented landing gears for. He attended many airshows with his buddy, Bud Jackson. Sonny loved farming and car shows, and was especially proud of his 1969 Plymouth Superbird. Additionally, he enjoyed go karts and his time running the Cashmere Speedway. Sonny’s presence will be missed by all who had the pleasure of knowing him.

Those left to cherish his memory include his loving wife of 35 years, Betty Brookman Brown; one stepdaughter, Lori Claytor Riddle of Pearisburg, VA; two grandchildren, who were his life, Tyler Riddle of Morgantown, WV, and Audrey Riddle of Radford, VA; brother-in-law, Bill Brookman and wife Judy of Hardy, VA; sister-in-law, Bonnie Sutton of Brooklet, GA; cousins, Mary Alice Belcher and Diane Keaton; his best friend and pet cat, Blackie; and many, many friends.

Funeral services will be held at 2:00PM on Saturday, August 13, 2022, at the Broyles-Shrewsbury Funeral Home Chapel in Peterstown, WV, with Pastor Walt Bonnell, Rev. Jerry Sawyers, and Barry Harper officiating. Visitation will be from 1:00PM until time of services on Saturday at the funeral home. Following the services, per Sonny’s wishes, he will be cremated.