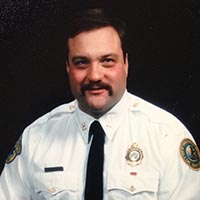 Mike graduated from Blacksburg High school (1975) where he played football and was a stage manager. He became a dispatcher with the Blacksburg Police Department before he went to the fire training school in Virginia Beach. He had a wonderful long career as a fire fighter and became a Battalion One fire chief in Virginia Beach.

Mike retired to Floyd in 2012 where he and wife Lisa and dog Ax lived on the Little River. Survivors include his beloved wife and best friend, Lisa Kay Taucher, daughter Katie Elizabeth Brown and son Garrett Gordon Brown (North Carolina), sister Sheridan Brown and sister Karen DeBord of Smith Mountain Lake. Grandchildren, nephews, friends and extended family will always remember his words of loving caution “SAFETY FIRST.” The family and a few close friends will be honoring Michael in a private memorial ceremony.

Instead of flowers the family asks that you please consider contributing to a fire training academy scholarship fund that is being established in Michael‘s name. Checks may be made to: Fraternal Order of Virginia Beach Fire Chiefs, address is P.O. Box 56151, Virginia Beach, VA 23456-1151.