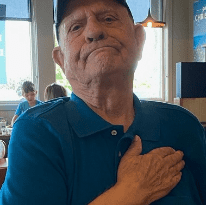 Frank Elbert Brown, 93 of Staffordsville, VA, went to be with the Lord on Friday, April 15, 2022, at his home. Frank was born on June 8, 1928, in Norton, VA and was a son of the late Frank Lee Brown and Leanor Lawson. Besides his parents, he was preceded in death by 2 brothers, Walker and William Brown and 4 sisters, Spicey Brown, Maxie Lucas, Bertha June Sumpter and Ella Ruth Ratcliffe.

Frank was a graduate of Pearisburg High School Red Devils and was a Veteran of the United States Army. He retired as the Postmaster of the Staffordsville Post Office with 39 years of service. He was a member of the Pleasant Hill United Methodist Church in Bane, VA.

Funeral services will be conducted Monday, April 18, 2022, at 2pm with the Rev Shahn Wilburn and Pastor Mike Reynolds officiating with burial following in the Eaton’s Chapel Cemetery in Staffordsville. The family will receive friends at the church one hour before the service from 1 – 2pm.