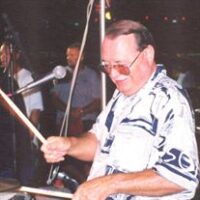 Donald Ray Brown of Christiansburg, VA has drifted away to his eternal home in Glory on 5/25/2015. He was born in Radford, VA on 3/28/1946. He was a life-time resident of the New River Valley. He was preceded in death by his mother, Helen R Dressler; and sister, Ruth Dressler.

Don was an avid musician and he started Don and The Deltones in 1962. He married Diane Jennelle in 1967. They welcomed their beautiful baby girl, Laurie Rae Brown in 1968 and their son, William Christopher Brown in 1970. Despite Don and Diane parting ways in 1978, they remained friends and took joy in the raising of their children.

Through all these years Don earned his living through his passion for music and entertaining. Although Don mainly led The Deltones he also played in the Ken Epperly Orchestra, as well as the Mood-Makers. Don and The Deltones were a popular band in and around the NRV, opening for big name bands such as Blood Sweat and Tears, The Impressions, Clarence Carter, and many others along the way.

Don entertained many people throughout his storied career, and always said that if he could bring a smile to one person’s face, or make them forget their problems for a little while, then he had done his job.

Don was an animal lover and would like instead of flowers donations be made to a local animal shelter or music program.

The family will receive friends on Thursday, May 28, 2015, from 5-8 p.m. at Horne Funeral Home. Please join us for a Memorial Service celebrating Don’s life on Friday, May 29, 2015, at 2 p.m. in the Horne Funeral Home Chapel, with Rev. Butch Bishop officiating. Interment will follow in Sunset Cemetery, Christiansburg.