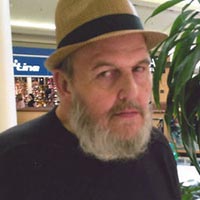 Daniel Paul Broussard, 61 of Glen Lyn, passed away on Saturday, August 1st, 2015 at his home with his wife of 41 years, Judy Pollard Broussard, by his side. Born in Jennings, Louisiana on August 19th, 1953, he was preceded in death by his parents, Ferris Joseph Broussard and Delta Broussard Berger; his stepfather, Marvin Berger; and his father-in-law, James O. Pollard.

Daniel worked as a pipefitter, and traveled to many states with his job. An accident in 1985 on a job in California changed his life from carefree and happy to a life of chronic pain. He loved to do woodworking and gardening until his pain made it impossible to do. In 2013, his grandson, Elijah, was born. Elijah could bring a smile to his face, and a sparkle in his eyes. He was a very proud papaw. His body is gone, no more suffering, and he has found the perfect fishing spot he always dreamed about. Memories will keep him with us forever.

Funeral services will be held Tuesday, August 4th, 2015 at 2 PM in the Chapel of Riffe’s Funeral Service in Narrows. Burial will follow in Birchlawn Burial Park in Pearisburg. The family will receive friends at Riffe’s Funeral Service Monday from 6 to 8 PM. The family requests that those sending memorial contributions, please consider the Giles County Relay For Life to benefit the American Cancer Society.