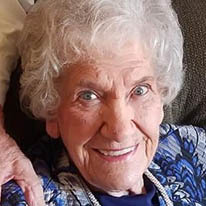 Frances Bailey Britts, 94 of Pearisburg Va, went to be with the Lord on Monday June 13, 2022, at Highland Ridge Rehab Center in Dublin. Frances was born on October 21, 1927, in Narrows Va and was a daughter of the late Charles Raymond Bailey and Ethel Akers Bailey. Beside her parents, she was preceded in death by her husband William (Bill) Pierce Britts, two sisters, Vicky Sue Bailey and Mildred Bailey East.

Frances was a faithful member of Pearisburg United Methodist Church. She retired from after many years. She loved watching her TV games, enjoyed Bible studies and gospel music. She also loved and enjoyed the company of her family and friends.

Funeral Service will be conducted Monday June 20, 2022, at 2pm at Pearisburg United Methodist Church in Pearisburg Va with the Reverend Brian Burch and Pastor Jay Smith officiating with burial following at Birchlawn. The family will receive friends at the church one hour before the service from 1-2pm.

In lieu of flowers, Frances requested that memorial Donations be made to Pearisburg United Methodist Church 1101 Valley View Pearisburg Va 24134. The family would like to thank Highland Ridge Rehab Center in Dublin for their wonderful care.

The family is being served by Givens Funeral Home in Pearisburg Va. (540) 921-1650. Online condolences can be sent to the family at givensfuneralhome.com