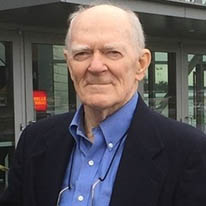 Kelly graduated from the University of Rochester with a mechanical engineering degree and enjoyed a distinguished 50-year construction and project management career. He began as a project manager for a Canadian permafrost engineering firm, where his team built runways at remote sites across the Canadian Arctic. He then worked for homebuilder, Caldwell and Cook, inspiring him to manage the construction of his family’s first home. Later, at Harris Communications, he headed international telecom infrastructure projects in Europe, Nigeria, Libya, South Africa, and Saudi Arabia. After an 18 year career at Corning Incorporated, highlighted by managing two major plant start-up projects in Blacksburg, Va., and Shanghai, China, Kelly decided to retire. However, he subsequently resumed work in his field, serving as a project manager at Pepperdine University, the Getty Villa, and the Getty Center in Southern California. At age 77, he was recalled to Corning Shanghai as a project consultant.

Kelly spent his childhood in Batavia, and at age 12, he moved with his mother to Ottawa, Canada, to rejoin his father, who was serving in the Royal Canadian Navy. He finished high school in Ottawa and first attended Clarkson College in upstate New York, where he met Mary Ann Rose. The two were married in 1963 and moved to Rochester, N.Y., where they raised their two children, Andrew and Katherine. Kelly was a fully engaged father, always encouraging his children in their academic, athletic, and personal interests.

In 1988, Kelly and Mary Ann relocated to Blacksburg, Va. for his work at Corning. After Mary Ann’s death in 1999, Kelly, supported by friends and colleagues, moved to Shanghai as a key member of the start team for Corning’s two-year plant construction project.

After project completion and retirement from Corning, Kelly moved to Los Angeles to be near his daughter, Katherine, and her young family. He enthusiastically embraced his grandfather role, attending hundreds of his grandchildren’s baseball, basketball, and softball games, tennis matches, and performances, capturing special moments with his ever-present camera. “Grandpa Kelly” was beloved by his own grandchildren and by all of their friends as well.

Kelly met Doralyn Harris in 2009, in Los Angeles, and they grew very close, sharing many interests, travelling extensively together, and spending time with family.

Kelly’s quick wit, endearing sense of humor, and natural warmth and charisma lit up a room. He was an avid reader and an accomplished photographer who was well known for sharing his action and travel photos with his friends and family. Kelly was a club champion squash and racquetball player and a self-admitted airplane buff who built and collected model planes for years. His most profound trait was his curiosity, which led him to explore new places around the globe from Normandy to New Zealand. His favorite saying was, “Never let your memories outnumber your dreams.”

Kelly was preceded in death by his father, Russell; his mother, Irene; his brother, Gordon; and his wife, Mary Ann. He is survived by his daughter, Katherine and husband, Joe, and their children, Matthew and Meredit, his son, Andrew (Gayla May), and Doralyn Harris.

A memorial service will be held at 12 noon on Sunday, July 24, 2022, at St. Alban’s Episcopal Church, 580 Hilgard Avenue, Los Angeles, CA 90024, a reception will follow. In lieu of flowers, please consider a donation to the UCLA Jonsson Comprehensive Cancer Center, www.cancer.ucla.edu/donate.