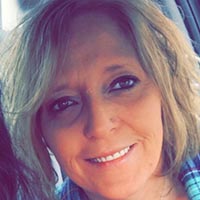 Susan Renee Bowles Brewster, 46 of Pigeon Forge, TN, formerly of Narrows, VA passed away Tuesday, July 9, 2019 at the home she shared with her companion, Joshua David Harris. Susan was born on November 30, 1972 in Pearisburg and was a daughter of Larry Gilmer Bowles and Dorothy Sue Perdue Bowles.

Susan was a 1991 graduate of Narrows High School and later pursued a career in phlebotomy. She was a gifted artist and thoroughly enjoyed the outdoors. While in Tennessee, she and Josh were avid members of the local Jeeping community. She loved life and the company of her family and friends.

A private Celebration of Life will be held at a later date. The family is being served by Givens–Riffe Funeral Service in Narrows.