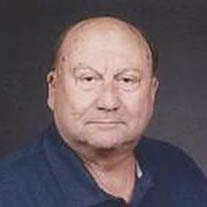 Clarence William “Billy” Breese, Jr., age 74 of Dublin passed away Saturday, January 23, 2016 at the New River Valley Medical Center. Born May 31, 1941 in Chattanooga, TN he was the son of the late Rev. Clarence & Mary Breese. His sister, Kathy Breese Blessing also preceded him in death.

Being the son of a United Methodist minister, he grew up in a number of towns in Tennessee and Virginia. He graduated from Hiwassee College and served in the United States Army. Billy worked for Appalachian Power Company in West Virginia for 30 plus years.

Billy had made his home for the last 30 years with his sister and brother-in-law; Jerry and the late Kathy; the light of his life was Jerry’s grandson, Jordon Blessing who had “Bilbo” wrapped around his little finger.

Left to cherish his memory

Funeral services will be held at 1:00 PM – Friday, January 29, 2016 at the Dublin United Methodist Church with Rev. Don Hanchew officiating. Interment will follow at the Southwest Virginia Veterans Cemetery, Dublin. The family will receive friends one hour before service time.

Bower Funeral Chapels, Pulaski is handling the arrangements for the family.