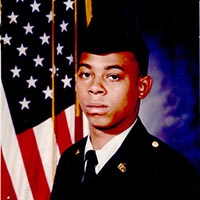 Donald E Boysaw was born March 14, 1971 in Roanoke, VA. He was raised on Baskerville Street in Dublin, VA. After finishing school, he joined the Army where he was an expert Marksman with an M-16 rifle. He was honorably discharged in 1998. He then returned back to Dublin where he loved to cook, fish and play with his only grandson, Ky’Mani. He was a loving, caring, person that will truly be missed by his family and friends.