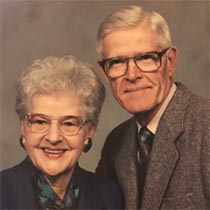 Earl Neal Boyd, 95, of Blacksburg, died on June 16 at The Crossings in Blacksburg, VA. He was born in Trinity, KY on December 20, 1922 to the late Mr. and Mrs. Samuel Boyd, and raised there, graduating from Tollesboro High School. He served in the US Army from 1942-46, attaining the rank of Staff Sergeant. Neal earned his undergraduate degree in agriculture from Eastern Kentucky State University (1948), his master’s in dairy manufacturing from the University of Kentucky (1949), and his Ph.D. in dairy technology from Ohio State University (1952).

It was at EKU that he met his future wife, Jeanne Ruark. He became an assistant professor of dairy manufacturing at UK in 1952, where he supervised the processing plant. As a research chemist at Swift & Company in Chicago, he did research to develop new and improved dairy products. He spent 11 years as a research administrator for the US Department of Agriculture, overseeing food products technology grant activities at state agricultural experiment stations, with a year off to do flavor research at Penn State.

Neal came to Virginia Tech in 1968 as the first head of the Department of Food Science and Technology. He retired in 1988 as associate dean of the College of Agriculture. He is a past president of the American Dairy Science Association and served 2 terms as chairman of the Association of Southern Agricultural Experiment Station Directors.

Neal was an avid Virginia Tech basketball and football fan for 50 years. This year he attended almost all of the men’s and women’s basketball games. He also loved playing golf. When he was 90, he shot an 88. And he enjoyed a daily Sudoku puzzle.

He is predeceased by his wife of 65 years, Jeanne Boyd, his sister, Jeanne Wigginton, and his brother, Royce Boyd. He is survived by a son and daughter-in-law, Mike Boyd and Karen Torgersen of Blacksburg; four grandchildren, Kevin Boyd, Timothy Boyd, Scott Boyd, and Lindsay Nalevanko; seven great-grandchildren; and his sisters, Charlene Gracey and Emma Nash Bevacqua of Raleigh, NC.

Our family would like to give special thanks to Dr. Gregory Beato, Good Samaritan Hospice, and The Crossings for the support and care they gave Neal.

A memorial service will be held at 2:00 p.m. on Saturday, June 23, 2018 at Blacksburg Presbyterian Church. There will be a reception following the service. In lieu of flowers, memorial contributions may be made to the Virginia Tech Boyd-Arline Scholarship Fund or the charity of your choice. Arrangements by McCoy Funeral Home, Blacksburg