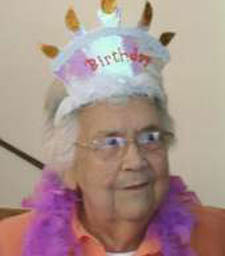 Sophrona Grace Bowman, 90, of Curve Road, Pearisburg, departed this life Friday evening, February 12, 2016 at Carilion Giles Community Hospital in Pearisburg. Born in Caretta, West Virginia on October 19, 1925, she was a daughter of the late Fitzhugh Lee and Irene Gordon Fleming.

She was a graduate of Big Creek High School in War, WV in 1943, worked production in manufacturing, as a nurses aid in Bluefield, attended First United Methodist Church in Pearisburg, and for many years was a volunteer with the Senior Citizens Center in Pearisburg. She was preceded in death by her parents, her siblings Juanita Fleming, Thurston Fleming, Bureda Rowe, Biddy Gay Roberts, Hardwick Fleming, and Fitzhugh Lee Fleming.

She leaves to cherish her memory her children Anthony Bowman and his wife Carol Ann of Ripplemead, Mike Bowman and his wife Kaye of Bluefield, WV, Sharon Grissom of Richmond, VA; her grandchildren April and Shawn, Sebastian, Dominick, Jason, Lorne and Susan, Jonathan; her great grandchildren Taylor, Ethan, Alana, Tristan, and Celeste; her brother Herman Fleming of Maryville, TN, her sister Marcella Whalen of Archbold, OH, and several nieces and nephews.

Funeral services will be conducted Wednesday morning at 11:00 am in the First United Methodist Church in Pearisburg with pastor, The Rev. Dr.Brian Burch, officiating. Burial will follow in Roselawn Memorial Gardens in Princeton, WV. The family will receive friends at the Kendall Funeral Home, 605 Snidow St., Pembroke Tuesday evening from 6 until 8 pm. In lieu of flowers the family respectfully requests that memorial contributions be made to Giles Life Saving and Rescue Squad in Pearisburg. The Kendall Funeral Home in Pembroke is in charge of arrangements. Online condolences may be sent by visiting kendallfuneralhome.com. 540-626-7221.