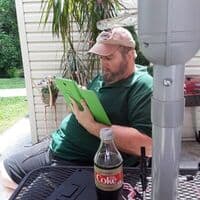 It’s with great sorrow, we announce that John R. Bowles of Pulaski, Virginia passed away on Christmas Eve December 24, 2022. Born in Roanoke, Virginia to Agnes and Lewis Bowles, he spent his younger years pestering his older sister Ruth Crockett, taking care of his pet skunk and enjoying the mischievous machinations of his cousins.

That all changed when he met the love of his life, Lynda James Bowles on the school bus one day. With his sweetheart by his side, he went on to achieve whatever he set his mind to. Most of his professional life was spent in the United States Coast Guard, starting with search and rescue and retiring as a CWO2 in the mid-1990s. He also accomplished a dream of his and published his novel – Seventh Chakra. He cultivated the minds of his daughters and every one of their friends that they brought to the house. Every child became his child. He knew no stranger and always made sure people had laughter in their hearts, a full stomach and a smile on their face. He pushed the idea that people should question what they are told and research everything, but above all treat one another with kindness and dignity.

The world lost a great light when his was extinguished.

His wife of over 52 years – Lynda Bowles – Pulaski, VA

Per his request no service will be held, a celebration of life will be held at a later date. To sign John’s online guestbook, visit www.bowerfuneralhome.com – Bower Funeral Homes, Pulaski is handling the arrangements for the Bowles Family.