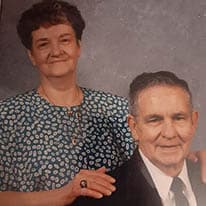 A good name is rather to be chosen than great riches, and loving favour rather than silver and gold. Proverbs 22:1

Jack Harner Bowles, 93 of Narrows, VA left his earthly home to his everlasting home on angel wings on February 11, 2022. Born on May 13, 1927, in Wolfpit, Kentucky, he was a son of the late Charles Kemper and Leona Harner Bowles.

Jack was raised in Bland County, Virginia until his teenage years, when he moved to Giles County and fell in love with his brown haired, forever sweetheart, Evelyn Smith Bowles. He was a devout Christian of the Pentecostal Faith. He was a member of the fellowship of worshipers at Bethel Chapel in Clendennin. He served as Sunday School teacher, deacon, enjoyed playing guitar and singing along side of his wife; and helped in any capacity needed. Jack served as a corporal in the US Army, serving in World War II. He enjoyed working in his garden and spending time with his family. He was affectionately known as PawPaw Jack to his grandchildren, who he enjoyed joking with and earned the nickname “The Joker”.

There will be a funeral service conducted to celebrate the life of Jack on Wednesday, February 16, 2022 at 11:00 AM in the Kendall Funeral Home Chapel in Pembroke, VA with Pastor Eddie Kendall officiating. A graveside service with Military Honors will conclude the service at Fairview Cemetery in Narrows, VA. Family will receive friends at Kendall Funeral Home on Tuesday, February 15, 2022 from 6:00 PM until 8:00 PM.

A guestbook is available to send a condolence or sweet memory by visiting www.kendallfuneralhome.com. The staff of Kendall Funeral Home are honored to be serving the Bowles Family.