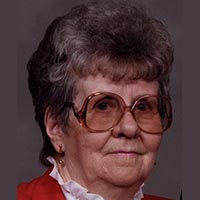 Hogie was also preceded in death by her parents, Early Burton Smith and Veda Southern Smith. Her daddy passed when Hogie was only sixteen years old and also a daughter-in-law, Joan Barker Bowles, Jerry’s wife preceded her in death.

Born in Giles county, VA and raised at Eggleston, Hogie graduated from Eggleston High School and lettered in basketball. She attended Bluefield State College and worked in an office at the Celanese Corporation in Narrows. After marriage and starting a family, she gave up her office job becoming a homemaker but still worked on and off in retail sales. Hogie left Eggleston to live in Pearisburg and later in Marion, Fairlawn, Dublin and then back home to Giles County and Ripplemead.

Early years of her life, she and Bill rode together on his Harley-Davidson. Then their interest grew into NASCAR. They traveled to all the NASCAR tracks on the east coast and all through her life from when her boys were little, were vacations from Tennessee to Florida. After Bill retired from Norfolk Southern as a Roadmaster, they also traveled on numerous Sunshine Bus Tours. While living in Fairlawn and Dublin, Hogie volunteered at Radford Community Hospital and later at Carilion New River Valley Medial Center. She acquired a total of 8,000 hours of volunteer service.

Hogie was taken care of from April 2019 until her passing by Janetta Collins, caregiver. Janetta gave excellent care as if Hogie was her own mother. The family was blessed to have someone that gave many hours, seven days a week, to the care of Hogie. Thank you Janetta.

Hogie had a dear friend that was a neighbor in Pearisburg where she lived in the 70 and 80’s. Upon her return to Giles County, Hogie renewed that friendship with many, many visits by that dear friend, always bringing her a loaf of homemade bread. That friend is Perk Givens.

Hogie is survived by two sons, Jerry Wayne Bowles, Billy Dale Bowles and her grandson, Brad Bowles all of Ripplemead. Funeral services will be conducted Saturday, February 22, 2020 at 11am at the Edgewood United Methodist Church in Ripplemead with Pastor Pam Sutherland and Pastor Shahn Wilburn of Riverview Baptist Church will be officiating. The family will receive friends at the Edgewood United Methodist Church Friday evening from 6 – 8. Music and song will be provided by associate Pastor Terry and Gayle Easter of Riverview Baptist Church.