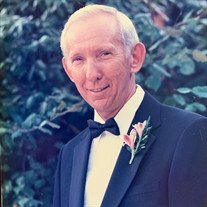 Trent Calvin Bowen (Papa), 90, of Blacksburg, Virginia, stepped into the Lord’s presence, without fanfare, early on March 16, 2021. Having reached 90, Trent was in good health until recent years, but never stopped trying to “get better”.

He was preceded in death by his parents, John and Luella, five brothers and five sisters.

Trent married the love of his life, Laurie, in 1952, shortly after meeting on a blind date. He is survived by Laurie and his three children: Beth Howell (Wayne), Trish Snow (Sam), and Rodney Bowen (Adair). He is also survived by nine adored grandchildren and five treasured great grandchildren.

Trent was born on a family farm in Shoals, NC, on a cold December morning in 1930. On the morning he was born, his father brought the family cow into the house so that his mother could milk her during labor. The youngest of eleven children and valedictorian of a high school class of thirteen, Trent was the only one of the family to attend college. Trent played basketball for Wake Forest along the way, and remained active and athletic much of his life. He especially enjoyed golf and snow skiing and incorporated both into his love of travel whenever possible. He and Laurie traveled cross country multiple times, first in a 1968 Volkswagen and later in their motor homes. Their motor home adventures included trips to Alaska, Australia, New Zealand, and Europe.

Trent graduated from Wake Forest University (’52) with honors, and then he attended law school, receiving his law degree at Duke University in 1955. He was an attorney with State Farm Insurance for 35 years, finishing his career in Charlottesville, Virginia, in 1992. Trent was a kind, gentle, mild-mannered man with a dry sense of humor that he used every single day of his life. He loved family, friends, strangers and God, and was famous for his “projects” throughout his life. One of Trent’s favorite quotes was, “A penny saved is a penny earned.”

Trent enjoyed teaching his children and grandchildren all sorts of skills, from mowing grass to painting to wood working. He was well-versed in the art of living frugally but he was also well-known for his generosity. Trent cared about those who struggled, and he was ready to help if his help was needed, working for years with Habitat for Humanity. Trent loved God and lived with the end in mind. He lived well and he wanted to end well, and he succeeded.

A celebration of Trent’s life will be held at 11am on Saturday March 20, 2021, at Blacksburg Baptist Church. The family will receive friends following the service, observing social distancing and masking guidelines. In keeping with his generous nature, Trent donated his body to medical science. In lieu of flowers, memorial tributes in his honor can be sent to Blacksburg Baptist Church or The Warm Hearth Foundation.