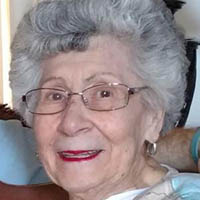 Phyllis Marie Loudy Allen Bowen, of Pearisburg, Va., left this life on September 21, 2019, at Heritage Hall Nursing Home facility in Blacksburg, after a courageous and hard-fought battle with cancer. She had family at her side when her journey to heaven began. She was just three days shy of her 85th birthday, which the family celebrated with her the previous weekend.

Phyllis was born September 24, 1934, to Clancy Homer Loudy and Iva Alice (Akens) Loudy in Kingsport, Tennessee. She is preceded in death by her parents; her husband, Robert D. Bowen; her son, Joaquin Bowen; her brother, Ralph Loudy; and her grandson, Justin Van Hemert.

As a Methodist minister’s daughter, Phyllis spent her childhood years traveling about the Holston Conference with her family from eastern Tennessee (Kingsport & Cumberland Gap) to southwest Virginia (Exeter & Floyd). She moved to Floyd as a rising high school senior, and she graduated from Floyd High School in 1952. As she had already completed a large portion of the Floyd High School senior curriculum during her junior year of high school in Harrogate, Tenn., she spent much of her senior year substitute teaching an elementary school class in Floyd. Throughout her life, she took great joy in telling about her father attending college at the same time she attended high school, explaining that he taught her math while she taught him English.

Phyllis’s first marriage to Robert Jackson Allen after her high school graduation in 1952 produced her eldest three children. Three years after that marriage ended, she met the man who would become the love of her life and “Dad” for all her children, Robert Dewayne “Bob” Bowen. Phyllis and Bob married in May of 1965 in Christiansburg, and they spent 43 wonderful years together. They moved into their home in Pearisburg in 1969. Phyllis worked at Radford Arsenal for approximately 13 years beginning in the early 1950’s. During most of those years she provided carpool transportation for several other Arsenal employees, which produced many stories of funny mishaps, dangerous roads, inclement weather, and car trouble.

She left her job at the arsenal in 1966, and in 1970 she and Bob began their great joint self-employment venture. They owned and operated “The Music Shop” in Blacksburg for 34 years, supporting the local music community with instruments and printed music, and serving musicians, music teachers, and band & choral directors all over the United States with printed musical arrangements until their retirement in 2003.

Phyllis was the friendly, never-met-a-stranger personality always at the counter greeting customers with a smile, answering the phone, and typing invoices. Phyllis cherished her family above all other earthly possessions, and she was an instrument of Christian Faith always. As a lifelong member of the United Methodist Church, her devout and patient faith led her to attend Holy Family Catholic Church in Pearisburg with Bob when he asked her to, where they would raise the younger children in Bob’s Catholic faith. She never converted, but maintained her Methodist faith throughout. Anyone who knew Phyllis would agree that she was the personification of Matthew 5:9, “Blessed are the peacemakers, for they shall be called the children of God.” She served as a wonderful intersect of the Protestant and Catholic Christian faith communities in Pearisburg.

Phyllis had the sweetest, most generous heart for children. Being a mother, grandmother, and great-grandmother was her greatest joy. She loved and doted on ALL her “babies,” which were not limited to her own offspring. Phyllis opened her heart to all her children’s friends, all her friends’ children, her customers at the shop, and countless others she encountered throughout her life. Anyone included among those she called “hers” held a cherished spot in her huge heart.

Family will receive friends for visitation on Tuesday, September 24, 2019 from 5 to 7 p.m. at Givens Funeral Home in Pearisburg. Funeral service will be Wednesday, September 25, 2019 at noon at Givens Funeral home, followed immediately by interment at Birchlawn Cemetary in Pearisburg, where she will be laid to rest beside husband, Bob and grandson, Justin. All her grandchildren will be her pall bearers, with those unable to attend or physically serve represented by proxy.

The family wishes to extend special thanks to Phyllis’ many caregivers, including those who assisted her in her home, at treatment appointments in Pulaski, at Heritage Hall, and the wonderful angels with Interim Hospice. There are simply too many to mention by name, but we want them to know that she counted them all as “hers.”