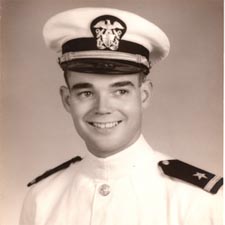 Joseph Logan “Bud” Booze Jr., passed away unexpectedly in Blacksburg, Virginia on February 6, 2016 at the age of 87. He was preceded in death by his parents, Joseph Logan Booze Sr., and Hilda Steinbock, and brothers William and Robert Booze.

Bud was born and raised in the Mt. Washington suburb of Baltimore. He graduated from St. Paul’s School and then attended the Univ. of Baltimore on a lacrosse scholarship. He was in the Navy Reserve from 1946 to 1978. A graduate of Officer Candidate School in Newport, R.I., he retired with the rank of Commander. Bud worked for 27 years in both the graphic arts and packaging industries, retiring in 1987. Bud was a member of the Corinthian Lodge #93, Scottish Rite and Boumi Temple. He lived at the Maryland Masonic Home in Maryland before moving to Warm Hearth, Blacksburg in December 2015.