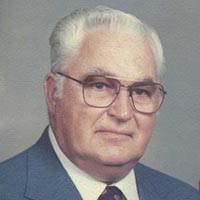 Kenneth Eugene Booth, Sr., of Pearisburg, VA departed this life Thursday morning, October 24, 2019, in the care of Heritage House in Blacksburg, VA. Born in Giles County on February 14, 1928, he as a son of the late George Guy and Gracie Craig Sarver Booth.

He was a retired foreman at the Celanese Plant at Narrows, a veteran of the U S Army (Korean Conflict), liked to square dance and fish and his spiritual roots ran deep in The First Church of God.

He was preceded in death by his parents, his beloved wife Thelma Crabtree Booth and a granddaughter Christie.

He was the devoted and loving father of Drema B Williams and her husband Curtis of Pembroke, and Kenneth E Booth Jr. and his wife Sharon of Land-O-Lakes, Florida; he was the grandfather of Brooke Corkhill (Rob), Morgan Adair (Daniel), Emily Walker (Lee) and Ben Williams (Kourtney). He was great-grandfather ten times and great-great-grandfather two times, and a beloved friend to many.

Funeral services will be conducted Sunday, October 27, 2019 at 3:00 pm in the Big Stony Creek United Methodist Church at Kimballton . The Rev. David Kessinger will officiate. Burial will follow in Birchlawn Burial Park in Pearisburg with military honors by local VFW and American Legion Posts. The family will receive friends at the church one hour before the services.