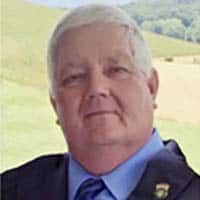 Barry G. Booth, age 70, passed away on Monday, December 27, 2021, at the Lewis Gale Pulaski Hospital in Pulaski, VA. Born October 8, 1951, in Pearisburg, VA, he was the son of the late Eugene Hunter and Glenna Catherine Carper Booth.

Barry was a member of the Cashmere Baptist Church in Cashmere, WV, and was a U.S. Army Vietnam Veteran. He was a proud farmer, as he was recognized by the FFA as American Farmer. Additionally, he was a delegate for Milk Marketing Inc. and formerly served as president of the Monroe County Singing Convention. He was a beloved husband, father, grandfather, brother, uncle, and friend.

Funeral services will be held at 11:00AM on Saturday, January 1, 2022, at the Broyles-Shrewsbury Funeral Home Chapel in Peterstown, WV, with Pastor Walt Bonnell and Pastor John Offenberger officiating. Burial will follow at the Dunn Cemetery in Peterstown, WV.

Visitation will be held from 6:00PM until 8:00PM on Friday, December 31, 2021, at the funeral home. Online guestbook can be signed or condolences may be sent to the family at www.broyles-shrewsbury.com. Arrangements by Broyles-Shrewsbury Funeral Home, Peterstown, WV.