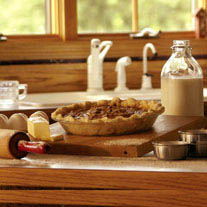 Lou Ona became a member of Indian Creek Primitive Baptist Church on September 11, 1976. She lived a simple life on the family farm and was blessed to enjoy family, nature, and the cattle. Meals served in the kitchen were delicious and made us very thankful for our large family and many friends who visited. The spontaneity of sharing and laughter in her home will always be cherished.

Funeral service will be held 11 a.m. Tuesday, November 1, 2011 at Maberry Funeral Home with Elder Thomas Pegram officiating. Interment to follow at Beaver Creek Cemetery. Family will receive friends from 5 to 8 p.m. on Monday, October 31, 2011 at the funeral home. In lieu of flowers, donations may be made to Indian Creek Primitive Baptist Church, c/o J.B. Mitchell, Clerk, 195 Kimball Lane, Christiansburg, VA 24073. Online condolences may be made by visiting www.maberryfuneralhome.com.