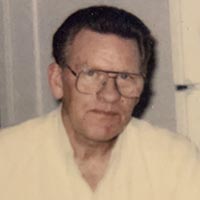 Fred P. Bond passed away on April 28th, 2020. He was 77 years old. Born in Barren Springs, Va he followed his big brother to NJ and never really left. Burlington City was his home for over 50 years.

Fred was considered a “jack of all trades”. In his younger years he delivered medical equipment for Wheatley’s Pharmacy and was a Burlington City Police officer for a short time. His vast trades included owning a gas station in Willingboro during the 1970’s and a general store in Pulaski, VA during the late 1980’s. But his true passion was mechanics and worked for several auto places throughout Burlington County. He could often be seen working on restoring his 1957 Chevy or driving around in his 1956 Chevy. Even during his retirement, he could be seen around town delivering flowers for Dullos’ Florist.

In 2015 Fred was diagnosed with Progressive Supranuclear Palsy (PSP) a rare degenerative brain disease which is a form of Parkinson’s.

He is preceded in death by his wife Donna L. Bond, his parents, Richard and Creola Bond, his in-laws, Peter and Lois Walter, his brothers and sister in laws, Jessie and Dorothy Bond, Garland and Cathy Bond, His sisters and brother in laws, Dora and June Taylor, Pauline and Larry Clark, Imoline and Edmund Staples. Brother in laws Ben Hancock and Fred Deptula. And his granddaughter Anna Claire Wright.

He is survived by his daughter and son in law, Tracey and Gary Weincyzk, sister in laws, Patricia Walter and Hazel Walter, his brother and sister in law Roger and Ellen Bond of Barren Springs, VA and his sister Freda Hancock of Pulaski, VA. Fred had a special bond with his niece Danyell Ekelburg and nephews Peter Ekelburg and Ben Hancock Jr. but is survived by many loving nieces, nephews and cousins to numerous to name but loved just the same. He also is survived by two step grandchildren Tyler Wright and Melissa (George) Ondusko.

It was during his retirement that he found his loving companion Sheila Miller and was “step dad” to Kristen Nixon and Greg Miller and was known as “Pop-Pop” to Shane, Hollister, Dash, and Zach.

A memorial service will be held at a later time.

In memory contributions may be made to: