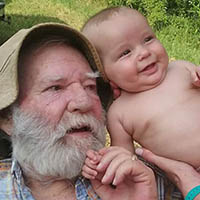 Curtiss Theodore Bobbitt, “C.Ted”, passed away peacefully at his home in Dublin, Virginia on September 13, 2018 at the age of 76. He was born on August 15, 1942 in Galax, Virginia to John and Jessie Bobbitt. He was the second oldest of 5 siblings and spent most of his childhood and early years living in Riner Virginia.

He was a member of the 1960 graduating class from Auburn High School and went on to attend Va Tech where he focused on agriculture. After college he began working on the Phillips farm in Riner where he spent 10 years as a dairy farmer. He then pursued a career in real estate as a farmland specialist for the next 10 years. His final occupation was in the timber industry which he retired from a few years ago.

Ted spent his retirement using his amazing gift of creativity making baskets which quickly spread throughout the community as a highly prized piece of art. The pride that grew from his basket making was obvious to anyone who talked to him and he found great joy sharing them with anyone he met. He was overjoyed at the happiness he brought to those special people he gave a basket to.

Ted is preceded in death by his parents John and Jessie as well as his oldest son Dane Bobbitt. He leaves behind his wife of 18 years Carol Lynn Bobbitt of Dublin Va. He also leaves behind his two remaining sons and daughter-in-law, Stuart and Karen Bobbitt of Radford, Va and Derek Bobbitt of Christiansburg, Va,; Two step daughters and their husbands Tracy and Walter Hagar of Lexington, Ky and Tonya and Bobby Phillips of Christiansburg, Va,; 5 Grandchildren Brittany Warren of Salem, Va, Brandon Cressell of Parrot, Va, Shannon Cressell of Dublin, Va Lydia Sarver of Forney, Tx and Bradi Phillips of Christiansburg,,Va; A sister and brother-in-law Cindy and Donnie Board of Radford, Va, 3 Brothers and sisters-in-law Frank and Norma Bobbitt of Fancy Gap, Va, Jim Bobbitt of Austinville, Va, and Gary and Brenda Bobbitt of Riner, Va; Friend and mother of his boys, Patricia Hubbard of Jacksonville, FL And Numerous Nieces, Nephews, Family and Friends.

We would like to say a special thank you to The Drs. and Nurses who treated him and the family with such kindness and compassion and Good Samaritan Hospice where there are no words to express our gratitude and sincerest thank you, especially Kim, Kathy, Tammy, Todd, Kim, and Tracy and Andy. He thought of you as family and were our strength at the hardest time of our lives. He truly loved you each beyond words.

Graveside Memorial will be held Saturday, September 22 at 10:00 am at McKenzie Cemetery in Galax, Va