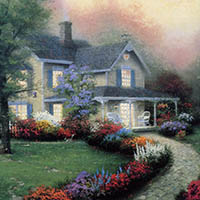 June I. Boardman, of Blacksburg, Va., at the age of, 91, joined the Lord and her husband, Ted Boardman, on December 31, 2008. June was born in Tunbridge, Vt., on September 15, 1917. At 18 years of age, she married Ted and enjoyed 65 years of marriage before he died in 2000. June first worked for Vermont’s agricultural department and then as an Administrative Assistant for the National Life Insurance Company in Montpelier, Vt., for 32 years. Shortly after retiring in 1978, she and Ted moved to Blacksburg, Va.

June was predeceased by her father, Clarence E. Rogers; mother, Myra; brother, Clifton and his wife; and sister, Stella Cilley and her husband. She had 12 brothers and sistersinlaws on Ted’s side of the family, but only two of these inlaws are living, Hilda Rogers and Selma Walker. Needless to say, June had a very large extended family.

June was a wonderful, caring person whose first thought was for others. For years she served as a vibrant member of the Old Meeting House Church located in East Montpelier Center, Vt. She was strong, fiercely independent, conscientious, and meticulous. After Ted’s death, she continued to live alone in the Virginia home they built until the time of her passing.

She had a rich sense of humor and was always quick to smile or laugh. Among her favorite sayings were, “Thicker than hair on a dog, ” “Don’t be a bull calf (be strong), ” “The road’s so curvy that you can meet yourself going the other way, ” “Do you have a bone in your leg? (description of laziness), ” “It has had the radish (worn out). ”

June was a no-frills person who enjoyed the simple things, like conversation, gardening, canning, knitting, typing (>100 words/ min.), crafts and crossword puzzles. It was common for people in the community to tell her children that their mother was a special lady. She was very down to earth and made many lasting friendships during her lifetime. June displayed great courage in her final days. She is loved dearly and will be sadly missed.

June will be buried next to her husband, Ted, in the Tunbridge Village Cemetery. The funeral to celebrate her long and bountiful life will be postponed to June of 2009, due to Vermont’s winter season. No gathering will be held in Virginia. In lieu of flowers, the family asks that donations be made to the Old Meeting House Church, 1620 Center Road, Montpelier, Vt. 05602, 802-229-9593, or the Blacksburg Rescue Squad, 200 Progress Street, Blacksburg, Va. 24060, 961-1189.